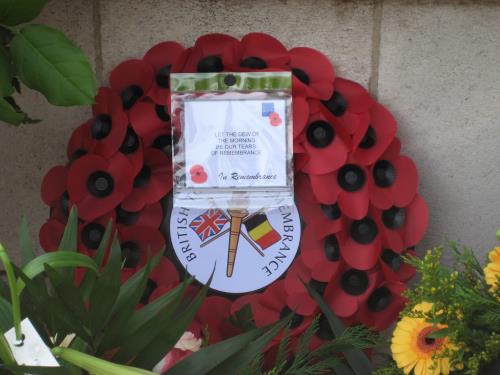 The Duke of York’s Royal Military School has been associated with The British Torch of Remembrance for a decade.

Tomb of the Unknown Warrior

Each November, senior selected pupils in ceremonial uniform provide an Honour Guard at the Tomb of the Unknown Warrior whilst a service embracing the rekindling of the torch is led by the Dean of Westminster.  Buglers sound The Last Post and Reveille.

Senior students also play a significant role the following day in the Service of Remembrance held at the Dover Marine Station (Western Dock) as the British Torch of Remembrance Pilgrimage prepares to depart for Belgium.

The pilgrimage lasts for several days in early November with key events and ceremonies taking place in Oostende, Brussels and the Menin Gate in Ieper. Other historic locations include Bredene and Roeselare.  Pilgrims come from all over Britain, from all three Services and none.

Whilst the story of the British Torch of Remembrance dates from 1965, the idea of a torch to act as a symbol of remembrance for fallen comrades in the First World War originated in Belgium in 1926. Inspired by an idea of The Belgian National Veterans Federation (FNC), representatives bearing torches from the nine provinces of Belgium assembled annually on 11th November at the national memorial to the Unknown Warrior in Brussels, the Colonne du Congres.  There, having paid homage, the torches would be extinguished for that year. The popularity of this symbolic act spread rapidly throughout Belgium so that several hundred local torches were borne to the main provincial towns and their spirit was handed over to the provincial torch.

Following the end of World War ll, a group of Belgian officers in London decided to see the permanent flame rekindled at the Colonne du Congres; it had been extinguished by the Germans during the war. Their torch was lit at the Tomb of the Unknown Warrior at Westminster Abbey and transported to Brussels to rekindle the permanent flame.

Over the years, torches from countries such as France, Brazil, USA and The Netherlands, where Belgian ex-servicemen had settled, joined the pilgrimage and in 1965 a British Torch first made the journey to Brussels. Its guardians were a group of ‘Old Contemptibles’, comrades of the old Belgian Fifth Army. Since then, the simple passage of time has led to the British Torch being now the only one that represents the Anglo-Belgian community. Its members are proud to be associated with an organisation of such historic, diplomatic, religious and military provenance.