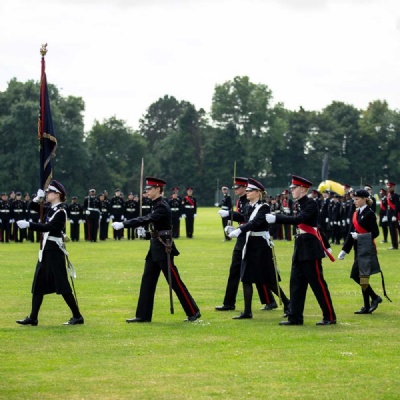 Grand Day – the pinnacle of the School’s year – saw the some 500 students in full ceremonial uniform on parade inspected by guest of honour Reviewing Officer, Brigadier Matt Bazeley.

The School’s impressive military band led Trooping the Colour which followed the inspection on July 5. Founded in 1803, the school is the only one in England and Wales to enjoy the Royal privilege of holding colours (granted in 1825 by King George IV) and marching the colours through the ranks; this only happens in infantry regiments.

Grand Day, which included prize-giving followed by the parade, was attended by about 3,000 parents and guests. Many of the pupils aged 11 to 18 have family in the armed forces and, as a personal touch, wear the cap badge of their parents’ or family member’s Service, Corps or Regiment over their hearts.

The School’s 150-acre countryside site was also the background for a Spitfire fly-past and jumps by the Royal Logistic Corps Silver Stars Army Parachute Display Team. And on the ground, there was a superb range of vintage military transport such as jeeps, tanks, and aircraft on display.

Mr Alex Foreman said: “The combination of high achievements by our prize-winning students and the whole school ceremonial parade with Trooping of Colour makes Grand Day a totally unique spectacle and a proud tradition of our military heritage. The entire event is led by our students who practice all year, so it was gratifying to see so many guests attending to enjoy this remarkable event.”