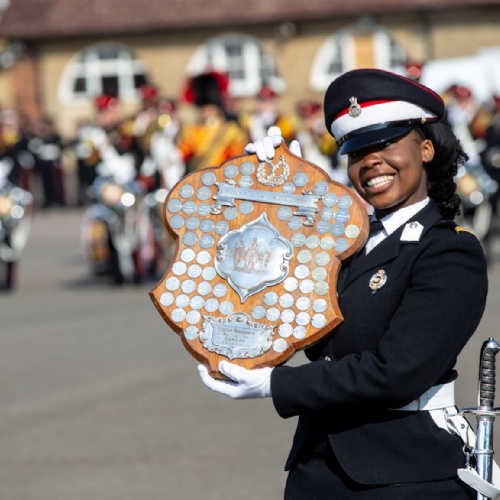 The annual inter-house Drill Competition for the honour of Trooping the Royal Colour saw students displaying their marching and presentation skills.

Those in Years 8 to 13 took part, representing their respective Houses, and all students paraded at the end of the day, led by the School's military band.

The final prize-giving and inspecting officer was Colonel Andy Thorne, Programme Director of two significant Army infrastructure programmes and Chair of the MOD’s European Local Children Safeguarding Board. He is also the school’s Chair of Governors and has three children at DOYRMS. Receiving the Drill Competition Shield was Jere, Junior Under Officer of the winners Alanbrooke House who will now have the honour of Trooping the Colour at our impressive Grand Day in July; second place went to Kitchener and third to Marlborough.

Founded in 1803, the School is the only one in England and Wales to enjoy the Royal privilege of holding colours (granted in 1825 by King George IV) and marching them through the ranks; this only happens in infantry regiments.

Principal Alex Foreman said: “Great teamwork and precision are the hallmarks of our keenly contested Drill Competition which brings the School together to celebrate our military ethos and rich Dukie history. It was also a privilege to welcome such an experienced team of judges.”