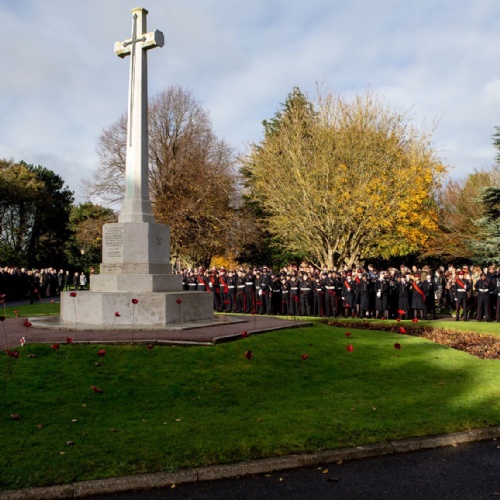 Students and staff from the Duke of York’s Royal Military School, Dover, took part in Remembrance events in London and east Kent.

The School’s Royal Military Chapel of St Michael and St George held a chapel service where the School Colours were laid upon the altar. The Duke of York's Royal Military School is unique among English schools in that it has the right to carry Colours.

Wreaths were laid at the School Cenotaph for the School by Principal Alex Foreman, for the students by Chief School Prefect Anton, for The Dukies’ Association by Mr Jolyon Marsh, for the Old Boys’ Association by Chairman Mr Phillip Moore, and for the British Torch of Remembrance by Major Mark Ellis.

Events began for the School on the previous Monday with the Torch Lighting Ceremony of the British Torch of Remembrance at the Tomb of the Unknown Warrior in Westminster Abbey. Wreaths were laid by the Belgian Ambassador and Armed Forces Minister James Heappey MP following a ceremony conducted by the Chaplain to the Speaker of The House of Commons.

Back in Kent, students followed the British Torch of Remembrance on its unique pilgrimage within east Kent, replacing the usual pilgrimage to sites including the Menin Gate and the Tomb of the Unknown Soldier in Brussels. From the Battle of Britain Memorial in Capel-le-Ferne, the torch was taken to The Dover Patrol Memorial at St Margaret's, and St Andrew’s Church in Dover.

On Saturday evening, the School hosted 200 former students in its dining hall for The Dukies’ Association’s Annual Reunion Dinner.

For photos of the Remembrance Events, please click here.