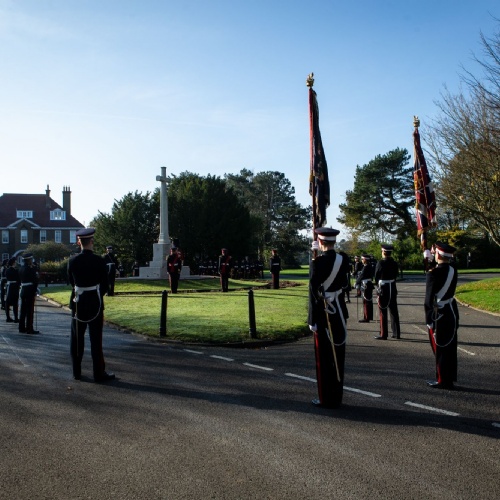 A service was held at the War Memorial on Remembrance Sunday.

When the body of the ‘Unknown Warrior’ was brought back to Britain from the Western Front on 10 November 1920, Duke of York’s Royal Military School students provided an Honour Guard for the arrival at Dover Docks.

Since then, the school has always honoured former students who have lost their lives during global conflicts, and were able to hold a socially distanced service on Remembrance Sunday (Nov 8).

The Dover school has its own War Memorial and Year 7 students, Senior and Junior Under Officers and some staff held a small parade followed by two minutes silence, prayers, laying of wreaths and playing of the Last Post and Reveille.

Alex Foreman said: “We were fortunate to be able to honour The Fallen and pay our respects in the traditional way, albeit on a smaller format to allow for social distancing but with the poignancy and solemnity the occasion deserves. The school has a proud military heritage; students wear the cap badge of a family member who has served in the armed forces on their dress Blues. It is called their ‘heart badge’ and is an important recognition of their own family's military history.”